Automatic camera (right) mounted near the solifluction station. The terminus of the rock glacier studied by DC-resistivity is seen in the background. Photo by Hanne H. Christiansen.

Four TSP scientists worked 7 days (21-29 July) on improving and extending the periglacial monitoring network in the Kapp Linne area, near the west coast of . We worked mainly with permafrost slope landforms such as rock glaciers and snow avalanche fans, and solifluction sheets. These landforms were studied by geoelectrical resistivity measurements to obtain information on content and location of ice within the landforms. One rock glacier (see photo above) were studied in detail with 10 resistivity lines from the free face over very steep and active talus slopes to the lower terminus of the rock glacier. This investigation will enable a 3D model of the ice content and distribution of resistivity in the ground. A potential borehole site was also identified on this rock glacier, hoping we will be able to drill to 10-30 m depth in the coming winter. The drill hole will be used for installing sensors for recording temperature and deformation. 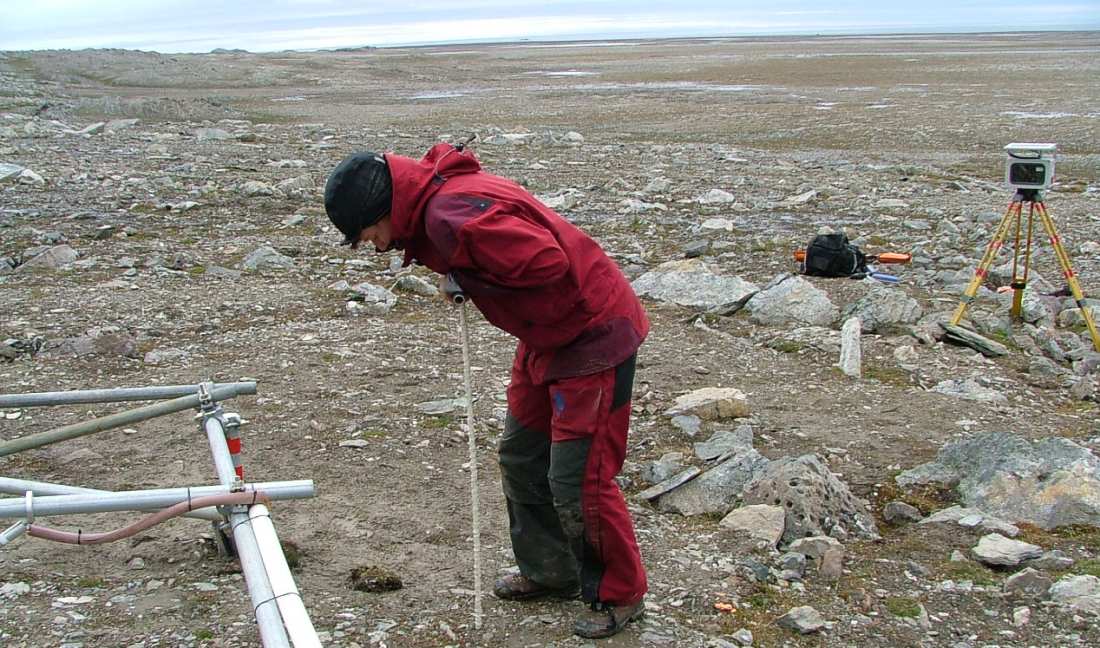 Rudberg column being inserted at the solifluction station. The automatic camera is seen to the right.

We also installed loggers that will monitor snow and or rock avalanches feeding into another rock glacier, and this site is also included on a daily automatic camera photo. At a large solifluction sheet, where we previously this summer established a solifluction measuring station, we now have finished the installations with an automatic digital camera (see above two photos), taking a high-resolution picture of the station once a day at . This will allow us to record snow depths during winter, and to follow any changes on the surface of the solifluction sheet. Also a soil deformation instrumentation was installed in cooperation with visiting Japanese scientists.

Ice and soil wedges were studied by ground penetrating radar and some sections down to the permafrost table were made to inspect sedimentary structures. Ice samples were obtained by drilling into the top permafrost. Instrumentation for measuring the activity of both ice and soil wedges were installed in collaboration with the Japanese project on periglacial monitoring.

Data from these new installations are planned to be used next summer in the planned IPY permafrost course, where we plan to compare permafrost conditions and landforms in with . 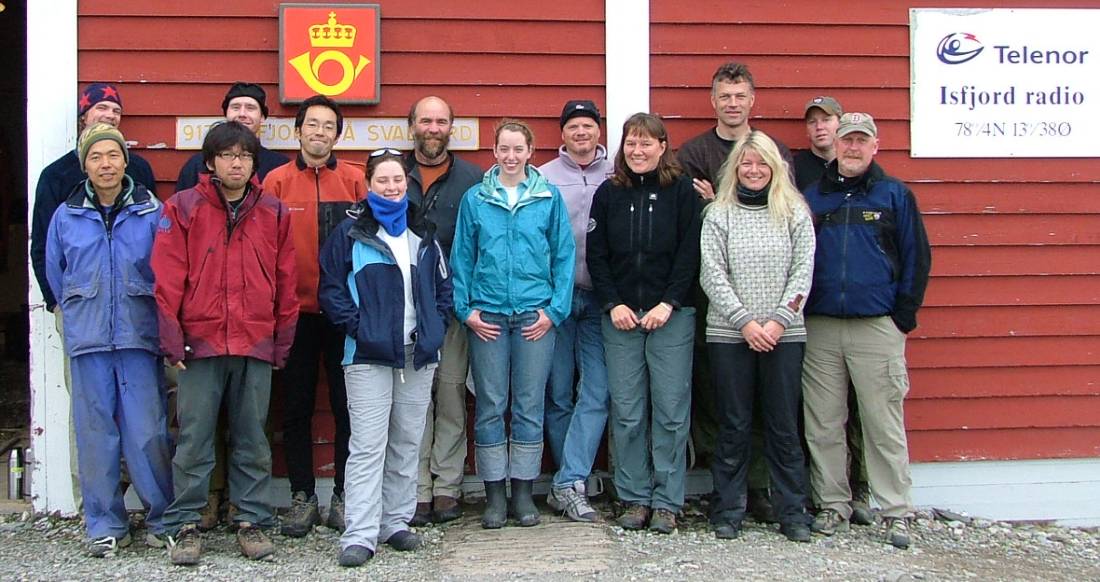 Japanese, US and TSP-Norway scientists at Isfjord Radio, Kapp Linne.

15 scientists lived together at the Isfjord Radio station during this fieldwork campaign, working on 3 other IPY related projects in addition to the TSP Norway project. There was a team of six scientists and students from the US doing an REU programme on the Linnevatnet sedimentation processes, including a TREC teacher, 2 Japanese scientists and a Japanese master student, who also studies at UNIS, all studying ice and soil wedges and soil deformation, a Norwegian master student with assistant studying lake Congress and its associated karst system.

In the end of the field campaign we were joined by a polar bear family, who also liked our field site so much that they preferred to stay for two days in the area. This significantly restricted the possibilities for walking where you like in the landscape, and we continously had to watch the bear behaviour to find out where they had planned to be, in order not to meet them in the field. It was a mother which were training two younger bears.